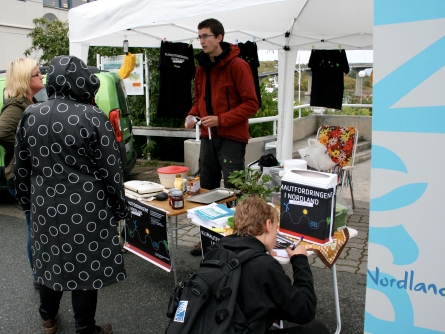 Good Practice: Innovative practice of engaging the public in consultations. Case study represents a good example of thinking outside the box when deciding how to communicate plans or other public documents to a wider audience.

Target group(s): Nordland County's population (estimated population per January 2011 at 237.280 or 4,8% of the Norwegian population)

In connection with the public hearing of the regional climate plan for Nordland, the following objectives were set:

The main objective of the climate tour was to create debate about climate change by talking to as many people in Nordland as possible. One additional outcome was increased local participation in the public hearing of the plan.

The climate tour was arranged in connection with the public hearing of the regional climate plan for Nordland County. Ahead of the tour the information about our plans was sent to the municipalities in Nordland. This led to municipalities volunteering to co-host activities.

The climate tour itself consisted in County Council employees travelling around Nordland in an electric car to carry out the following activities:

In connection with the activities emphasis was put on debating climate and energy issues in general. We also focused on relating these issues to local matters. The aim was to go beyond simply discussing the content of the climate plan. Items such as a pair of wellies, a green plant, a second hand chair and wine gums representing climate refugees were featured. They provided concrete starting points for discussion. A consolidated version of the plan was disseminated during the tour. This document summed up the main content of the plan and explained how to give comments. People were invited to give their comments on the plan by filling out "postcards" which they could drop at the Nordland County Council's "post box". Following the tour the County Council even received a properly stamped "postcard" in the mail.

It was possible to follow the tour online on the blog "Climate tour in Nordland" (http://klimaturne.origo.no/-/sandbox/show?ref=mst), the Facebook page "Climate challenges in Nordland" (https://www.facebook.com/klimaplan) and on Twitter (http://twitter.com/#!/NFK_Klimaplan). Additionally, reader letters published in local newspapers invited general population to participate in the climate tour and the public hearing.

After the public hearing all comments received during the climate tour were summarised and taken into consideration in the decision-making process on par with comments from other public authorities and societal actors.

- Over 100 were comments received, many from private individuals.
- Raised general awareness of the plan.
- The climate tour received good coverage in the media.
- People now associate Nordland County Council with climate and energy issues.

It was very positive to be able to travel across Nordland by electric car. More comments were received and it increased local participation. People responded positively to meeting the Nordland County Council face-to-face. Contact and cooperation with the municipalities. Issues were highlighted and debated and this created expectations for the plan. Nordland County Council succeeded in getting younger children engaged in the public hearing of the plan. The featured items and refreshments caught the children's attention. This led them to ask questions about the climate and energy and discussing these issues with us.

Overall, the climate tour allowed Nordland County Council to enter into dialogue with many more people in Nordland about the regional climate plan. Nordland County Council made successful use of alternative information canals (blogging, Facebook and Twitter) to inform people about the tour and participation in the public hearing of the plan. The climate tour is a good example of how one can be creative when communicating public documents to a wider audience.

Initiative was time-consuming and resource-intensive. There was varying support for the open meetings. It was demanding to summarize the comments and take them into consideration after the public hearing. One should have a strategy for working with the comments.

Due to road conditions, vast distances and low coverage of charging infrastructure among others, it can be challenging to deploy electric car in Nordland. The challenges one meets are not normally encountered in an office environment.

Unresolved issues: Climate issues are difficult to communicate to the general public. It was often challenging to give direct answers to the questions asked during the tour.